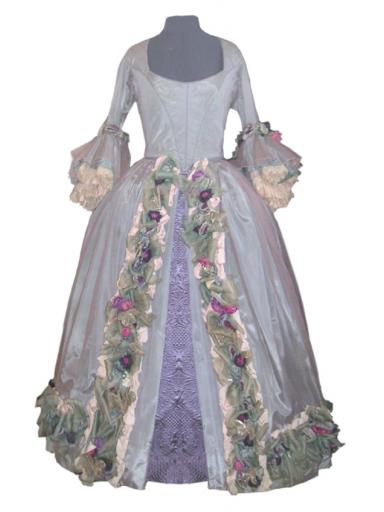 I purchased this gown at one of the S.F. Opera sales. I would guess that it had been a principal gown but since the tags werent in it, I couldnt say what production it had come from or who's dress it had been.

The dress is made of a light weight acetate with cotton tule overlay. The original underskirt was cream colored and very badly stained so I discarded it except for the cotton tule which I now have in my treasure box. There were many tears in the tule on the bodice from alterations and pulling under the arms along with underarm stains. The bodice was built on a muslin weight cotton and the peach silk taffeta cuffs where turning to powder. Clearly in need of rescue.

The dress was very close to being my size but I took it apart anyway so that I could re-flatline it with some more durable material. There were huge seam allowances from where it had been taken in. I used the extra material to make lacing placket, fix holes and fill in the underarms where they had been cut down very low. I re-assembled and re-piped the bodice. I took the waist band off and pleats out of the skirt so that I could iron it flat and re-stretch the tule over the skirt. When I re-pleated the skirt I took a few inches off the top because it was too long. That all went very well. The part of the project I grossly underestimated was the nearly 2 days I spent with a curling iron going around the dress and primping the flowers and leaves. UGH.

I made this quilted petticoat to replace the underskirt. It almost looks orignal. I used the 1745 corset and pannies I had made for the Courtesan Ghost Costume as the undergarments for this dress. 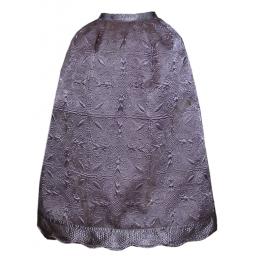