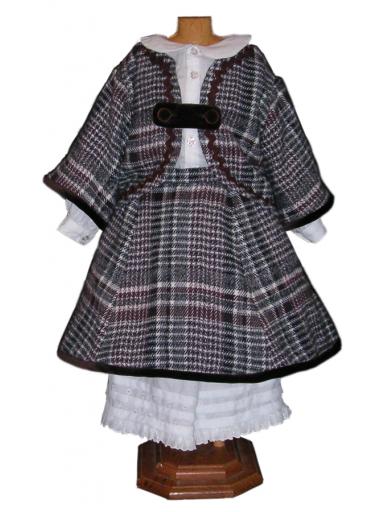 I made this for my son to wear while our family is performing at Dicken's Fair (http://www.dickensfair.com) located in San Francisco. Researching boy's Victorian clothing is harder than researching Victorian clothing in general. I have long known that little boys are dressed very much like little girls until the age of 4 or 5 years but only recently did I hear that this is because of the high morbidity rate among male infants and it was thought that evil and illness was less likely to attack if they appeared as little girls. One of the best sites for research is "Historical Boy's Clothing" http://histclo.com. This is suit is shown on my half scale dress form which is getting more use modeling toddler clothing than draping. The suit is composed of a white cotton eyelet shirt with buttons up the front and a peter pan collar. The bloomers are made from the boarder of the same cotton eyelet with white eyelet trim and decorative tucks. For the petticoat I used the scraps from one of my petticoats and corded the bottom for extra stiffness. Both the bloomers and petticoat have elastic waists. The suit itself is made from a plaid cotton flannel that does a very good job of looking like a woolen. It is trimmed with brown cotton velveteen, matching covered buttons and Van Dyke braid (rick-rack). Everything is machine washable. 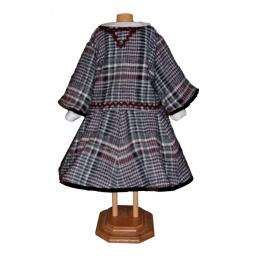